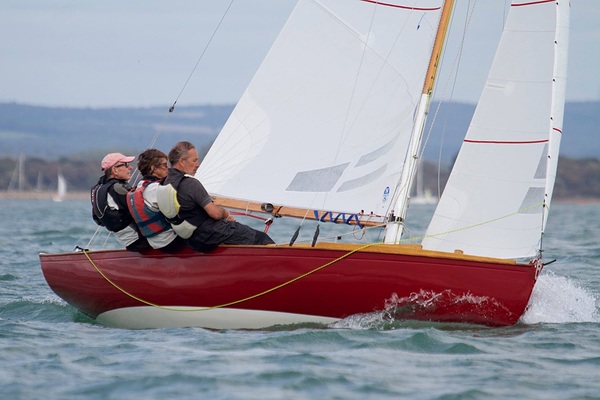 Itchenor Keelboat Week was a little delayed this year. In fact it was not week but four days. However, in many respects IKW had most of the elements that have always attracted the largest turnouts of the XOD fleet at Itchenor Sailing Club when it was called Points Week. First and foremost was the excellent race management and in particular superlative course setting that the fleet has enjoyed over the past sixteen years. Thank you Roger Wickens. Racing midweek in Chichester Harbour around high tide facilitates this. The number of boats taking part was down a bit on previous years at nineteen for understandable reasons. This did not mean that racing was any the less competitive.

Tuesday was the light wind day. There were patches of very light breeze across the course. One boat would get a puff while another nearby would get none. Was taking advantage of these zephyrs luck or skill? In most case the latter as manifested in the results. The top five in this race included no less than three former Captain's Cup winners. One, two and three were Catherine (Colin McKinnon, Ros and Neil Hart), Felix (the only visiting boat this year helmed by Peter Baines) and Lass (John Tremlett with Celia Hansell).

It was to be the same top three on Wednesday in markedly different conditions. The moderate South Westerly enabled a true test for all crews. Three long windward legs to marks at the southern edge of the Harbour gave the tacticians some head scratching - go left or right or down the middle? As tidal conditions were different for each leg so was the answer. An example of this was Catherine's second windward to Calvert buoy when she overhauled a significant deficit to take the lead.

As the wind had increased on Wednesday, so it did for Thursday. So much so that the forecasts had gusts of approaching 30 knots. An early decision was made to postpone racing and hold two races on Friday.

And so to the last day, Friday, and another challenge at the start of the first race. The wind was a light South Westerly and there was a strong flood tide. From a start line near Ellanore a simple decision had to be made. Left into East Head or right over the Stocker. Left was clearly right as demonstrated by Penny Fulford and Nigel Buckley in Madeleine. They started near the pin and cheated tide along the shore and close into East Head. By the time they reached the first windward mark a sizeable lead was established. The race was shortened at the second windward mark with Roger Yeoman and Michael Moss in the borrowed Athena just ahead of Alastair Shaw helming Phoenix with Beverly Coghlan and Jonathan Clark in second and third. With wind filling a little in the early afternoon the race team gave the fleet another of their challenges with a number of windward legs in changing tidal conditions. Peter Baines, benefitting from local input from Johnny Lawrence, established an early lead but was chased all the way by Astralita (Michael Martell, Fraser Graham and Tim Copsey) having her best race of the week. In third place was Catherine rounding off an excellent set of results.