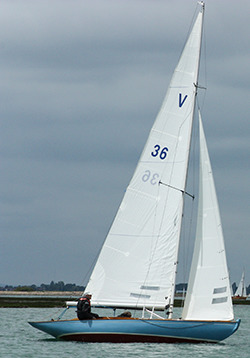 The Solent Sunbeam class fielded twenty boats from their growing fleet for Itchenor Sailing Club's Points Week and enjoyed some stellar racing. The perfect start and finish lines, and challenging long courses set by race officer Roger Wickens made for racing that was won both on tactics and boat speed.

Fluky winds in the mid week caused many place changes, which along with the challenge of solving the tidal streams in different parts of Chichester Harbour made for exciting racing.

Melody steered by John Ford with Julian Hawe started with two bullets and finished with two second places to win the series a stunning result for the Sunbeam's oldest member at 85 years young! Fay sailed by Richard and Sarah Pearson with Jo Johnson also scored two firsts during the week, a second and a third meant that just one point separated them from Melody in the final results.

Points Week for the Sunbeams is going from strength to strength both in numbers and the closeness of the competition.

XODs out in force at this year's Points Week

Changing weather conditions combined with the various different courses over the week ensured that the 28 boat strong XOD fleet was fully challenged at this year's competition. Monday's wind was primarily from the North so race officer Roger Wickens sent the boats initially up harbour before swinging them towards the harbour entrance.

This year's Swallow class at Points Week at Itchenor Sailing Club was dominated by Skua (co-helmed by Harry Roome and Will Rainey). Skua was challenged throughout the five days by several other Swallows but mainly by Svala (Will Henderson) who but for gear failure earlier in the week would have set the scene for an even more exciting final race showdown.

The 14 boat fleet enjoyed a variety of mainly light to moderate wind conditions and courses which ranged from those using the full extent of the harbour on the top of large Spring tides mixed with shorter 'sprint' courses which put added emphasis on starts, boat handling and boat knowledge. This gave several boats a chance to shine; Gwaihir (Mark Struckett), Migrant (Charles Fisher and Richard Thompson) and Spectre (Clive Bush) amongst them.

Skua's four race wins, two of them by deftly moving through the fleet, were the difference in this championship. Combined with their ability to extricate themselves without losing too many places when the fleet encountered a windless hole as in the sixth race which was won by Svala in grand style.