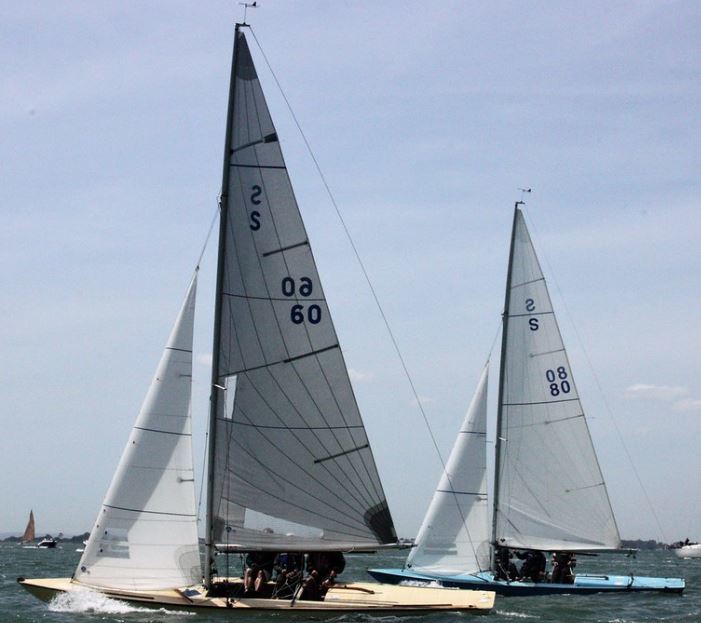 What sets these - and all - racers apart from less daredevilish mortals is their complete lack of fear and their joy of doing something on the edge. They love to speed because it is dangerous.

Forecast
With 35+ knot Westerly gusts currently forecast for tomorrow as part of 'Storm Hannah' the CC will send a separate note to boat managers later about the racing implications.

Four races, all to count, for the Deep End Trophy, were sailed over the Easter Weekend on the 20th and 21st April.

Lovely weather and great racing, thirteen boats turning out at various points, very encouraging this early in the season. With the wind swinging between NE and SE, mostly force 3 with the odd sojourn into force 4 and a spring tide everyone enjoyed near-ideal sailing conditions.

The first race was mostly Park Dunes and back. The fleet remained closely grouped on the long run to Dunes via the Pilsey shore although Kansu and Curlew tried 'crossing over' about halfway and gained as a result. Difficulties with tide and attention saw Skua and Osprey spinning near Dunes as they took penalty turns. Marengo (Olly Sloper) stayed away from trouble and was rewarded with the first place, followed by Kansu and Skua.

The second race started similarly at Thorney saw the fleet make for Peacock as the first mark. The fleet split between the Thorney and Rookwood shores with Solitude first at the mark followed by Blue Tit and Skua. Then a 'wobbly' run with the now-ebbing spring to John Davis where the fleet split again between Thorney and Wittering shores towards East Head via the East Head Exclusion Zone. This time Curlew and Archon made significant gains towards the Wittering side to move into 4th and 5th places. With tide building and wind faltering the race was sensibly finished at Park with Skua winning followed by Osprey and Solitude.

On Sunday the third race included a run all the way to Dunes with the fleet splitting between the John's Folly Channel and East Head, with the early leaders holding on past East Head. Solitude and Kansu led but confusion over finishing lines allowed Kansu to overtake and take the gun with Osprey third.

The wind had faded almost entirely for the last race so a pragmatic course was set from a start near Lowles straight to the Gallon line. The fleet's priority was not to be swept over the line and got away cleanly, with first into the fair tide Gwaihir winning from Solitude. Missing the Saturday pm race with all races counting resulted in both Kansu and Marengo sadly slipping off the podium.

John Marsh
John was part of the original Svala syndicate together with Christian Bang, Karen Bernays, John Glover-Wyllie and Philip Lancashire. Prior to that he sailed with John on Hilbre.

John's funeral will be at 2pm, Wednesday 1st May at St.Nicholas Church, Arundel. It will be followed by a private committal in the Churchyard at South Stoke; an immense privilege - there were sheep and lambs there recently!

The family say that if you are in this neck of the woods we would love to see you - and give you sustenance at 57 Maltravers Street, Arundel after the service.

Royal Yacht Club de Belgique Plate
The 'Belgian Plate' dinner is is a first of just three ISC Swallow social events this season. It would be heartening to have a few new faces as well as those who are normally able to support them. The current forecast for 4/5 May is pleasant!

Here is the dinner menu - note 'smart casual' ... no jackets or ties required!
Cod Loin with salsa sauce, lemon rice and mediteranean vegetables
followed by
Treacle tart with either ice cream or cream
with
Coffee and chocs

All for just £17.50. Please pre-book at the Office and advise any special dietary requirements.

And Finally........ Some Deep End Snippets
Skua shipped Carol Thompson and Ginny Fox from the Migrant syndicate for Easter Sunday, but failed to stop Migrant from luffing Skua over the start line for the second time in one weekend.
James Birkett missed race 2 after too much sun when did that last happen at Easter?
A few of the new North sails were on display will they move the Batts and Hydes from the front at the Belgique?

Ponder Challenge Cup - April 2019
The Ponder
The Ponder, three races, all to count, was sailed on Saturday the 13th April this year. Overseen by the Roome Team on Betivuka, it was encouraging to see 8 Swallows not only out so early in the season but highly competitive!

An Itchenor Park course was set for the morning b2b in pleasant if slightly chilly conditions. Being an Easterly breeze, about Force 4, there were significant shifts. At various points gusts moved 15 degrees towards the South resulting in constant place changing. In the first race with ebbing Neap Solitude tried the Itchenor shore, initially looking good but eventually fading. Spectre and Osprey 'worked' the Cobnor shore eventually getting to Itchenor with a lead they didn't relinquish, Spectre first, Osprey second and Whimbrel third.

The second race produced a similar pattern with Osprey this time winning followed by Solitude and Marengo with Spectre fourth. At lunch this place Osprey in the lead with a following bunch of Spectre, Marengo and Solitude.

Betivuka moved to the Thorney channel for the afternoon 'normal' race. The breeze was now SSE veering occasionally to close to SE, still gusty. Although challenging to set a course in these conditions the Roomes turned up trumps, sending the fleet to Freddy Brooks via a zone mark and back via the same zone, opposite handed this time.
Again, Osprey pushed ahead eventually winning the race and the Ponder despite Solitude, 2-Up, briefly getting in front of them upwind. Behind both, Spectre came in third.

This has already been sent to Boat Managers.

1. The Deep End Trophy (this Easter w/e 20 & 21 April). There will be a single race both am & pm on Saturday at the normal start times. On Sunday there will be b2b races in the morning as per programme to conclude the four race all-to count trophy. The pm race will not take place. This is to encourage Swallows to complete all the trophy races and then enjoy a leisurely Easter lunch with their families without having to sail once more. The strong spring ebb in the afternoon and forecast of lighter winds are supporting factors.

2. Easter Monday. The TO race will be re-designated as a P (Pollock Trophy) race.

3. The Royal Yacht Club de Belgique Plate w/e 4 & 5 May. There will be a single race on the Sunday morning. The 4 race, 3 to count Trophy will therefore finish on Sunday afternoon of this BH w/e.

'The Harbour Beckons!'
And they're off ...!
Back to the beginning (on 30 March for those still hibernating) when in balmy conditions (the waterproofs were shed early on) and influenced by a gentle southerly from the Sahara the heroes from Whimbrel, Solitude, Marengo and Gwaihir had a close tussle throughout with Gwaihir steady at the front, but with no opportunity to relax, and followed by Solitude for most of the race before Marengo (helmed by Philip Pascall) rather impertinently snuck past them on the finish line. Their reward was being the biggest fleet of the day.

Whimbrel has clearly thought better of sailing in the somewhat changeable conditions that have followed for the Toucantoo Trophy but full marks to the others who have braved the wintry conditions that have prevailed since podium places for everyone. The last of this series is on Easter Monday so (with a few interruptions on the way) there is still time to dent Gwaihir's lead.


Ponder Challenge Cup - Saturday 13th April
Will this be the real start of the season? Looks to be a nice enough day which has attracted a better if not stellar-sized fleet (per C2C responses are getting better and a few tweaks are on the way but this one was complicated by a rather early and out of sequence communication which may have caught a few out). NB The PRO team is from Skua!

The Keelboat Endeavour Trophy, Burnham - 27th/28th April
A new event designed to replicate the highly regarded and hugely competitive dinghy event in September and which has now got sufficient traction to warrant our support. It will be run by the Royal Corinthain YC and sailed in 707's (remember them!). Team Gwaihir will form the nucleus of the four man crew. We wish them well in this ten Class Champions event (their experience with mud-larking in Chi harbour is sure to be beneficial).

John Mash
We are sorry to report that John sadly died on the 5th April. John was part of the Svala team and one of the most delightful people every to sail a Swallow. He also had a cruiser in the Med. Once we know the date and location of his funeral we will advise.

Sunday Racing
Not exactly overrun with support thus far! Let us hope with improving conditions and the Brexit debate on hold ( ... don't mention the 'b' word Tony) we can muster more support. BTW the Easter w/e forecast looks quite tempting (and the Club still give out Easter eggs for race winners on the Sunday!).

And Finally........
The ISC Swallow team
We met recently to discuss a whole host of issues from illegal drug-taking on the water to the art of anchoring (where is yours located?). The next SN will have full details.

Many thanks to the many who recently provided Tom Clarence-Smith with their season plans. Updates on this shortly.

Diary notes ....
All aboard for the Ponder tomorrow!
The DE Trophy over the Easter weekend
The RYC de Belgique Plate (to use the proper moniker) on May 4/5 and a supper too on Saturday.