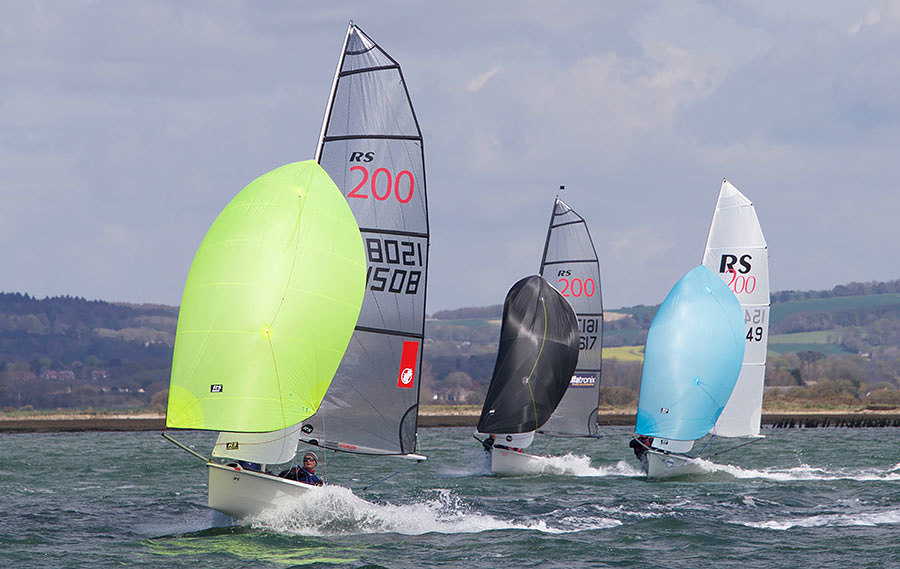 Thirty boats enjoyed classic sailing conditions at the RS200 Spring Championships held at Itchenor Sailing Club last weekend. The venue looked beautiful as ever in the bright, but chilly, spring sunshine for one of the biggest events on the RS200 Calendar.

A loose slot gasket meant that one boat never made it to the start line, but for the rest of the teams, race officer Bruce Grant did a fantastic job getting eight very efficient races away in a shifty Northerly.

Think Chichester Harbour and you think tide. It looked as though the current might be the order of the day as two thirds of the fleet was swept over in race one, resulting in an inevitable general recall. With that formality out of the way, the black flag kept most sailors in check for the rest of the day, ensuring everyone got back to the club in time for tea.

The positioning of the course across two channels meant there were a variety of routes to take up the beat and a multitude of different theories about which was best. One race in particular showed that even the locals can be fooled, with almost all of the Itchenor members hitting the left on the first beat, only to find themselves a hundred yards behind the visitors by the windward mark. However, there were clearly some gains to be made by local knowledge, as George Yeoman and Sophie Ormsby won race two and Andy Shaw and Pippa Horne won race four.

Tactically there was plenty more than the tide to think about. The breeze went steadily left for most of Saturday and oscillations (both regular and irregular) and gusts (both sudden and sustained) gave the harbour a reservoir feel. Will and Mary Henderson were the most consistent on day one with four top fives, but it was Matt Mee and Emma Norris who held the lead overnight with two firsts and a second.

Sunday was more or less identical to Saturday, with no particular side playing consistently and big gains (or losses) being made on every leg. A few people misjudging the tide and dragging buoys down the run with them, added extra drama to the mark roundings. Also local chandleries may need to stock up on gel coat for the rudders that lost their fights with anchor chains. Matt and Emma again took command on the results sheet, winning the event with a race to spare. Second to ninth were separated by just 14 points, which is testament to the high quality close racing that are the trademarks of Itchenor and RS200 sailing in general.