21 May 2015: Good turnout of Swallows at Itchenor Sailing Club 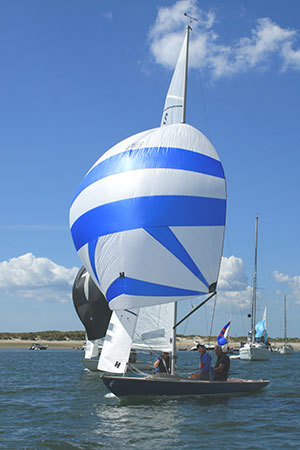 The Swallow class at Itchenor Sailing Club regards the competition for the Norman Moore trophy as one of the highlights of the year. This was demonstrated by the size of the fleet and the closeness of the racing 20 boats turned out and in the end just 3 points separated the top four.

Patience was the watchword on Saturday morning as winds were very light and tides strong. The race finally got going once the race management team were happy following much repositioning of start line and windward mark to give a fair race. It was Kit Glover sailing Darter who mastered the shifty winds and recorded a win by a considerable distance. Whilst the winds were a little more predictable in the afternoon, they could not be regarded as steady. Glover again scored a first place this time just "comfortably".

The wind on Sunday was in a more predictable quarter, coming from the South West, but took a time to settle. Now it was the turn of Marengo skippered by Carolyn Brigg who had been lying in second place overnight ready to pounce. Carolyn went up a gear to notch back to back wins due to savvy tactics and skilful boat handling. Skua (Harry Roome) was equally consistent with two second places, not quite matching the skills they normally display on longer harbour races. With four of the five races to count Marengo had virtually secured the trophy but sometimes there can be a final twist. So to the final race which was a rather more exciting harbour tour with fast spinnaker reaches in which Swallows excel. A mid-race wind shift made the second half more processional by which time Gwaihir had hit the front and despite Skua's harrying was not to be troubled. Marengo had an uncharacteristic mid-fleet result but remained safe at the top if only by the narrowest possible margin of a single point.