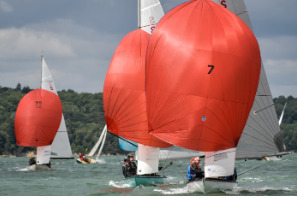 CCW
Many classes currently have one eye on their future, the Swallows being no exception. But however anyone is placed few would have failed to be captivated by the many unforgettable moments enjoyed by the Swallow Class at CCW 2019!

The week stood out with some of the closest competition ever seen, the pure excitement of the racing in Osborne Bay on the Wednesday mixed in with convivial cocktails, dinners, bonhomie and banter.

Details follow but thanks to the RLYC for a fantastic week!

CCW Racing
Race 1. Racing started as ever with a single race on the Monday pm for the 14 Swallows. With the forecasted F3 SE deciding it preferred to be F4 NE racing was held in sparkling conditions near Hillhead using one of the 'trapezoid' courses favoured by RLYC. Gwaihir made the initial running from the start pursued by Skua and Cockersootie but was not to be denied. Behind these we saw regular place changing with the bulk of the fleet arriving at the last mark within a couple of lengths of each other.

The finish, after a short reach following the last leeward mark, was between Committee Boat and distance mark, the latter being left to starboard. ISC RCS was later able to advise the Committee - but regretfully not the class - that such line conflicted with the charts handed out at the briefing which showed distance mark to port. Innocent and correct advice at the time but setting up for untold confusion in the next race ....

Races 2, 3, 4. With Tuesday lost to gales and a breezy forecast the Swallow Class Chair achieved the coup of persuading the PRO that Swallow racing should be held in Osborne Bay. The South Westerly kicked off at about 20kts, later producing a number of shifty gusts exceeding 25kts, one reported as touching 30kts. In amongst some spectacular racing across 3 races, Skua dominated until she lost her main halyard (again) before race 3. Gwaihir's challenge was inhibited by a DSQ resulting from a race 1 starting incident.

The finish of race 1 merits a place in the Swallow Annals. The Committee took Monday's advice on board and solved the issue by involving a second, Finish, Committee Boat flying the correct Blue Flag and with distance mark to be left to Port. Unfortuately the main Committee Boat left itself close to the port side of the distance mark thus exactly replicating Monday's finish. All complicated by the finish being under port pole close spinnaker reach. the sails helpfully obscuring the Finish Boat(!) Also, with sponsors, RLYC, circuit colour and other flags all flying it was a task to identify the blue! Some Swallows finished correctly, a number followed Blue Tit around the wrong side of distance mark. Realising, BT and followers then unwound themselves and 'finished' a second time(!).

Race 3 employed the first of the much-requested 'round the cans back to Cowes' courses in strong conditions. Breakages, discretion etc reduced the starters to 6, led by Swift under a gusty Castle Point to a RLYC Committee Boat finish. Whimbrel, having retrieved Blue Tit's pole (below), was then wiped out under spinnaker on the run whilst the latter, unable to use its spinnaker, survived.

Races 4 and 5. It was a long wait for the wind on Thursday and a long sail to the start to the East of Hillhead for an eventual start about 3pm in a fickle W which then shifted to WSW making, with a building tide, the first mark almost a fetch. The breeze then died on the first run before filling in to port resulting in much place changing. Skua led the way off the start and held onto win in a single lap plus beat race.

The WSW continued to build, eventually up to about 14kts resulting in a beautiful late afternoon sail in what would turn out to be the last completed race of the week. This time Gwaihir gained the edge on Skua and led throughout closely followed by Buccaneer. Again, most of the fleet were neck and neck right up to the finish line.

Overnight that gave a leaderboard of Skua, Gwaihir, Swift.

Race 6. We started so we didn't finish(!). The F3 NE died as forecast on the first run and after some thought, the Committee abandoned close to Hillhead ... with Swift leading and Skua 5th a Q flag finish would have given Swift the week. Not to be, the above leaderboard stayed. Swift went off to sail the Fastnet instead.

Post CCW Blues
When we were reflecting then about the less than perfect weather just note what has happened since unrelenting wind and add a surfeit of rain to go with it in CW!

In CCW we could be outside for evening receptions pity those in Cowes right now with no chance of that. Yes we lost two days (one to a gale, then a final day abandonment) and that impacted rather more on CCW than it will for CW. However we did get 6 races in (Sunbeams only 4) and we had 2 round the cans return-to-Cowes races!

The Itchenor Ladies welcomed us for afternoon tea -and for morning coffee and cake when the race schedule was postponed. Which brings us to the vexed question of that first day's racing why did we not start earlier and have at least one other race on that champagne sailing day in anticipation of Tuesday's blast? Comments and observations to the CC for the October de-brief meeting!

The racing? The season-long needle match between Skua and Gwaihir went into round 3. Both had setbacks Skua, whose mainsail fell down once in the VT (between the forts not perhaps the safest or most convenient point!) and again in R4 returning on the one-leg back to Cowes race after two humdingers in Osborne Bay and Gwaihir who lost a start line protest that same day.

Pivotal moments? When Harry went wide whilst leading first time round the spreader mark in R1 and Mike gybed inside and was gone for the first blood. Then next time in the delayed Osborne Bay battleground and without 4 boats who decided that discretion was appropriate Skua lobbed in back to take the first two races.

CCW Notes
Many thanks to Andy Fitz for loaning Calabash to tow about half the fleet home on Friday.
Ever-rivals Whimbel and Blue Tit both managed to drop spinnaker poles overboard in perfect synchrony at the last mark in Race 3, the second race in Osborne Bay. Circling back, Whimbrel retrieved a pole which, following later waterboarding, was determined to be Blue Tit's. Continued searching failed to locate the other pole but Lallows pulled out all the stops overnight to produce a replacement by cutting down a Daring pole so that they could race on the Thursday (they didn't) and Friday (abandoned before any poles could be used).
'Round the Cans' encouragement to the RLYC for the last race of the day? How did it go? Well, we did one. One can that is (!) ... a racing mark off Norris Castle on Wednesday. There would have been two but the Friday race was abandoned before anyone reached Hillhead.
Harry now accepts that his balls are too small.
Quote from a lady Swallow competitor: 'the men's showers at ISC (the IoW one) are much better'
(Enforced) lay day activities: Lunch at the RYS (Osprey), local bus trips to the Needles, Ventnor botanical gardens (various), and Ryde amusement arcade (the gamblers amongst us)
Neil Sandberg could only manage one day driving Ka Nyenga and distinguished himself with a creditable 4th. Also Alistair Impey who drove Cockersootie to a 2nd and 3rd during the week.
The Int 14 battle: just won by Andy Fitz in Swift after a swift (!) recovery from Peter's trip to St Mary's A & E dept when he won the Wednesday race home and finished 3rd overall. Many thanks too for all the baggage-carrying on Kalabash.
Great to see Peregrine out and showing flashes of speed (notably at the top mark in the first of Wednesday's races in Osborne Bay when after a faulty repair to the tear in their brand-new mainsail they had to race with their old spare minus battens!
We had a great time in Osborne Bay fast and furious! We did well to secure that desired option (someone had nobled the RLYC Cdre the previous evening). Yes the shifts and pressure changes were significant but aren't we used to that in Chi?
Our grateful thanks to Team Whimbrel (inc Lucy and Karen) and Blue Tit for their Sunday evening Rose and endless nibbles on the lawn of their pad. A great way to start. Our PRO Rod Nicholls was brave enough to come for his annual ear-wigging.
Equally to Buccaneer for their roof-top soiree with fab views of the Solent and every sq ft occupied (any stress-testing done before?!). The tricky bit was negotiating the trap-door access (especially afterwards).
Fastest trip back to Chi? If you saw Ka Nyenga being towed behind Mike Robinson's RIB there can be no doubt - the plume of spray was just incredible. Not in the harbour of course.

Diary Notes
Post CCW racing has been plagued by appalling and unseasonal weather when James H had his PRO duty last Sunday there was not a single taker from any class. Mike Lindsey was there to sail Ka Nyenga but sensibly thought better of it. This weekend looks 'interesting'too.
We have a 'spare' race billed for Bank Holiday Monday morning. We need to do a lot of catching up to complete some series requirements so we will do that and badge is the last hurrah and put a bottle on the table for it.
The Class Meeting is on Saturday 21 September. If you have something you want aired please let the CC know asap.

Other Notes
'Salty Wisdom' will return next edition, apologies for the omission, it is not that we have run out of wisdom
Here's a nice picture from Cowes Week TV of Anthony Lunch, Andrew Reid and John Houghton sailing RS Elite 40 'Basil' off on a reaching start on Friday at CW. The commentator states repeatedly that they were OCS. No hiding place! I thought of texting Anthony but might be seen as outside assistance. Also Bramblenet now gusting 24kts. Check the results tonight! We also look forward to a report from them for the next edition!

Courses Conundra (2)
We have yet to receive any responses to Conundra(1) - change of course when boats are lapped? Why not have a go? As a PRO it could happen to you! A prominent rules expert has also kindly agreed to arbitrate (next edition).

In the meantime have a go at this one!

'Course is B - A B F. With the wind dying the PRO decides on an urgent change of course, straight to F after A and this is signalled through flag C, hoots and course board close to mark C.
At the time Jasper and Stewart are running in parallel close to mark C. Jasper sails to F, the shorter distance resulting in his receiving the winner's gun. Stewart sails B F, coming second. Stewart protests that Jasper hasn't sailed the correct course.

Does Stewart have a case?'