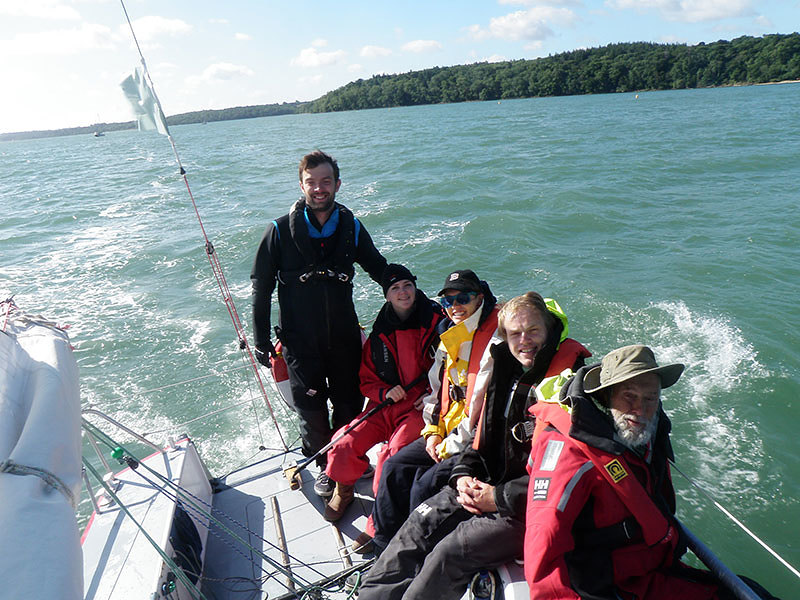 Andy Shaw and his team on the diminutive Flying Boat, put in a stunning performance this year in the RTI, winning their class and coming 8th overall in IRC. Below Alistair Shaw tells us about the most enjoyable race he has had for years.

"Despite a bit of a slow start (I forgot the radio so we had to go back), the air was lovely and clear for the first couple of miles. It was just our weather and our old sails did fine with the conditions. Two slabs in the main and the No. 2, 6 of us sitting on the rail and off we went!

By the time we reached the Spinnaker up at The Needles, we were well into our fleet and overtook hundreds on the downwind. We couldn't hold the spin all the way to St Catherine's, so took it down for the last mile, but then held it all the way to Bembridge.
It was a fast race, we averaged 7 knots (not bad for a 26th boat!) along the south of the island and seldom dropped below 10kts!

Andrew helmed brilliantly downwind with Tim Saxton on the sheet, in three jibes we only capsized twice and didn't lose much time. Pipa and I did most of the running around, with Michael and Rihanna keeping us upright. Andrew's complete refit of the running gear in the weeks leading up to race paid off as everything worked - a first for Flying Boat! We even managed tea and coffee after St Catherine's!"