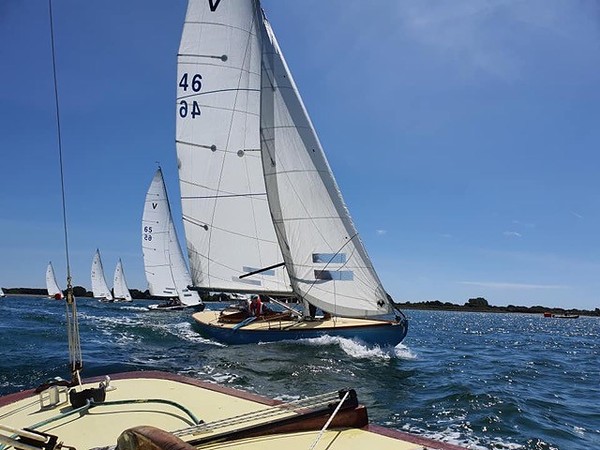 It was another lovely morning for the second day of racing for the Chittagong Cup with 17 boats in attendance.

PRO Peter Taylor again set a line near Camber beacon with a short beat to a special mark near East Head. With the flood tide running and a fluctuating 8-10 knots of wind, the fleet was not quite as spread out at the start as on day 1. A number of boats failed to lay the pin on starboard and had to gybe round to start. This included V26 Danny, the winner of the race on day 1 who also unfortunately hit the pin mark and had to do a 360 in no wind!

V41 Fleury had the perfect start at the committee boat end and sailed off with a good lead. The majority of the fleet went left up the first beat, one successful exception was V6 Little Lady who went right and was second at the windward mark, followed by V46 Spray and V65 Alchemy. A short reach to Johns Folly followed and then there was the traditional high-water destination of Beach on the middle of the Winner Bank.

With the tide still flooding it paid to plug away close-hauled on port tack towards the Winner Bank. V25 Query showed her speed and moved up into third place. In the meantime, Danny was slowly working their way up from the back of the fleet!

Thereafter, on a long run to a very shallow-looking Pivot, V6 Little Lady failed to hoist their spinnaker, so Query moved up into second place with Betty in third and V36 Melody in fourth. With the tide still flooding the fleet largely chose to sail over the Winner to the last windward mark - Treloar. Melody had a good beat and overtook Betty when the latter had to do a 360. The long run down to a special mark in the Thorney Channel saw few place changes except V18 Polly overtook Little Lady and V46 Spray.

The final run to the finish line saw quite a few place changes. Betty overtook Melody to take third place. V46 Spray and Little Lady both failed to fly their spinnakers for much of the final leg and this allowed Danny to take sixth place. Meanwhile, further back, V1 Dainty had to be towed off after hitting Roger's bump!

The results mean there is all to play in the final race tomorrow of this three-race-no discard series! Danny will have to hope that Fleury has a shocker after the latter's commanding performance today!

With a force 4-5 wind forecast, I am looking forward to this already!

1. Prizegiving will take ASAP after racing finishes and everybody is ashore
2. Dolphin is the only ferry available to us so please turn up early.
3. After racing the plan is to raft up for early evening drinks - so bring your own boat - meeting at the ISC jetty at 5pm. 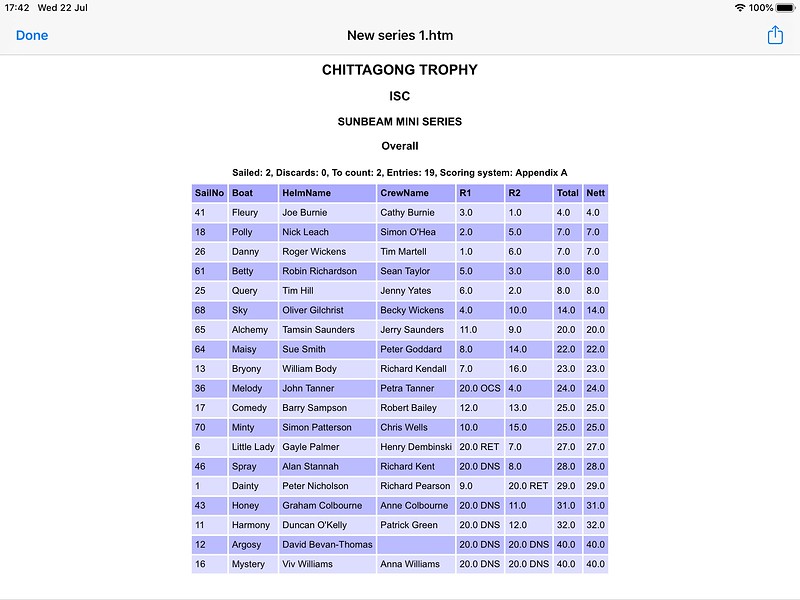