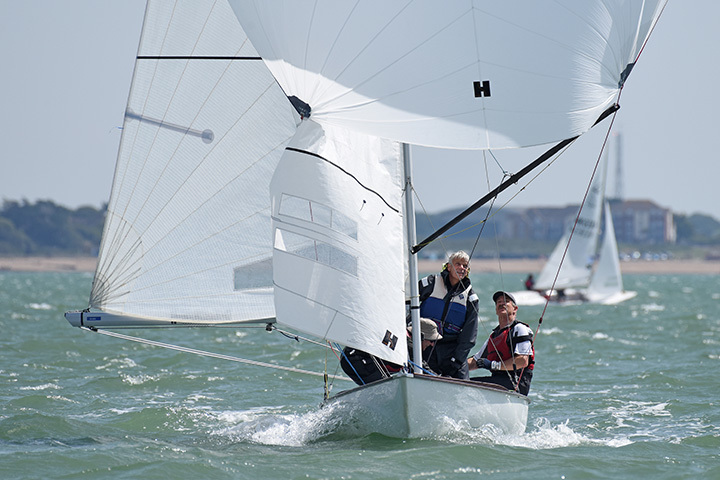 Vernon Trophy
It seems a long while ago now but we set out on our annual westward pilgrimage on Bastille day in good conditions (a spinnaker run out of the harbour!) and a mostly starboard tack route through the E Solent. Some went down the main channel, others went through the Dolphins and some (er) went right over the submarine barrier. The finishing order was Main channel (Gwaihir) 1st, Dolphins and sight-seeing in Portsmouth (Blue Tit) 2nd and Whimbrel (under the radar) 3rd. However the first four boats finished at Snowden within 2 minutes - and all 16 were tied up inside the breakwater within 4 hours. Should the course have included either through the Forts or through the Dolphins simply to make Betivuka's monitoring task a tad easier? Anyway thank you to Nigel, Liz and Caroline for their contribution and they were back on the ISC jetty at 20.30 too.

We wish good sailing to the 7 boats (2 of which are bursary boats) at the imminent CW. Looks like a breezy one.
For those still in the harbour the RIP Trophy is the main feature can anyone prise it away from the resurgent Buccaneer?
If you want the next best harbour regatta tea make sure you compete in the pm DQSC event on Saturday 12 August there is even a quickie in the morning to get the competitive juices flowing.
Wednesday evening racing continues on 2 & 9 August (yes it is JF curiously late this year but surely they will all be tucked up in bed by then?).
August ends with the double-header of the BSC and ISC regattas over the BH weekend.
Breaking news! Except thankfully it wasn't. Jemima Lawson (a Cambridge Varsity match competitor from Emsworth) and her father sailed Svala to Cowes on Thursday 27th in 25-30 knots - quite an introduction to Solent sailing. Avocet did likewise and was reported to be somewhat soggy and knackered on arrival.

Alex Thomson fab geezer! Who could not be amused and entranced by his enthusiastic and riveting account of the last Vendee (with the fastest boat but soon on disabled by a broken foil). The strength of mind to sail ¾ of the way around the world and even temporarily re-take the lead with this handicap was simply amazing. And he plans to do it all yet again!
It was fun (and hugely helpful) to have our 'own' Anne Taylor masterminding Championship things at the RLYC. She even got them to lay on tea and cake after racing.
Need the glasses? Snellie mistook the electric kettle for a gas one when he put it on the burner in Castle Road one groggy morning. Result: one molten kettle and Lucy sans chai. It's the thought that counts?
Talking of Whimbrel was it Ali G or Lucy who specified that sexy new North suit of sails? Full marks to Michael Cover for getting North to play a new dawn or a wake-up call for our other sail suppliers?
So the races were a tad shorter than we would have liked but there was no denying the dominant performers (Mark, Mike and Charles) who put in a masterful display (well after that R1 cock-up anyway).
Swift had a nightmare trip to Cowes. They towed the Swallow behind a RIB but it broke down in Hayling Bay and had to tow the RIB behind the Swallow back to Emsworth for repair and then had to set out again having left the RIB behind. Fortunately and having secured a race win and 2nd place overall they had an easy return to Chi.
What should we count as our own grand slam? NM, Championships, CCW & CW? 93 has just one to go no pressure then.
There was either too little wind for CCW (Monday) or too much (Thursday and Friday). Gwaihir won lots of goodies from the daily event sponsors (Haines, Henri-Lloyd and Harken) that must have sorted Xmas out at a stroke. The one they least expected was the overall CCW prize which prompted Mike to gush effusively about 'the best regatta he had ever been too'!
It has to be said that after the Whimbrel bash on Sunday (very many thanks), a hog roast and dancing at the CCYC, the Kendall's Art Gallery reception, the Haines do at the Squadron, a night at the RORC and a wonderful sell-out dinner at the RLYC did it really matter that half of the series was blown out? Most of the socials were free to competitors too.
The RLYC have table plan software that stops not-such-good-friends from sitting next to each other at formal dinners. Can anyone pirate a copy?
A snippet from the O & C invitational: Gwaihir had Sarah Treseder (CEO of the RYA) aboard. Mike's shoelace comes undone, somewhat provocatively he waves his foot around and with exceptionally good grace Sarah ties it up for him. CEO - and valet?

The Championships and Cowes Classics Week.

Our Championships are NEXT Weekend. The Vernon trophy passage race goes on Friday 14th July at 1300, our National Swallow Championships are on 15th and 16th July and Cowes Classics follows from 18th-21st July. Club2Class currently reports 15 for the Championships and 12 for Classics Week so we are on for some great racing. A "baggage boat" has been sourced and don't forget your safety gear for the passage race and the two "away" events.

Please can anyone who is in need of crew, or would like to crew contact Christine HERE She will try to put you in touch with each other. She also knows of someone with some Spare Accommodation.

For any queries on the Championships contact Tony Glover HERE. He has circulated all entrants with joining instructions so we should know what we are doing!
Its not too late to enter if you haven't already but you will have to move fast.

Sundays Invitational day was a great success with fifteen boats contesting the three race, all to count, series with six boats taking O&CSS guests. Early leaders were Hugo Fisher and Nigel Masting's Bluff and Carolyn Brigg in Marengo but the lunchtime leader was Blue Tit, in the skilled hands of Paul Giles and Tom Clarence-Smith and obviously restored to health after her recent extended hull restoration by Haines. By the end of the day though it was Skua that headed the fleet with Chris Creak and Dave Maclean sharing the driving. As usual on guest days there were no prizes for boats without guests so it was Sarah Treseder and Juan, guesting on Svala with your class captain that headed the guest prizes. As CEO of the RYA it was good for her to see the club on such fine form.
Full results are HERE

Wednesday Evening Sailing is now well on the calendar with six or seven boats racing on several occasions. Caroline Marriage has been doing a great job of coordinating crews and it is proving a good time to introduce guests to the fleet. Mike brought five along last week and thanks all who gave them a sail. Jamie Birkett won on his first outing so we can expect lots from Kansu this year.

The 100th Varsity match was hosted by Itchenor Sailing Club and the Swallow Fleet for three days last week. Richard Thompson and his team managed a superb prestige event which was a credit to the club and class. Displaying our club at its best to all these young and accomplished performers can only be good.
The teams not racing enjoyed themselves on Johnnie Cunningham-Reid's Serita. See photo below.
The full report is HERE.