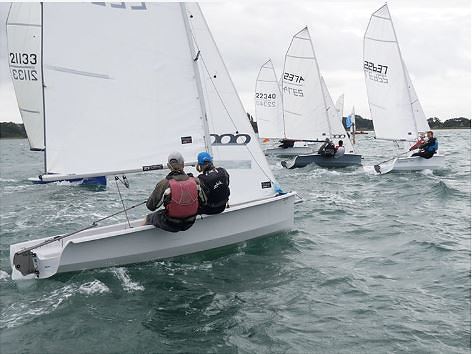 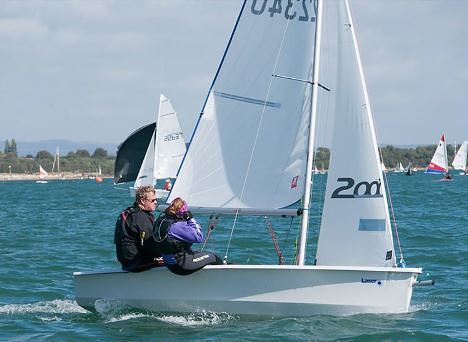 Conditions were sparkling for Itchenor's first 2000 open on the 8/9th September. Entrants travelled from Keyhaven in the west and Bough Beach in the east The expert race team consisted of Int14 sailors waiting for their boats to return from their recent World Championships in San Francsisco and they provided soild windward leeward courses and well run racing.

The three new club owned 2000s were sailed by ISC members and it was Rob Struckett and Senem Cillingiroglu who laid down an early marker with a win in race one with Miles and Audrey Wade from Thorney Island second. Conditions on Saturday were fairly light and the big tide calling the downwind angles critical. Richard and Ian Hudson won the next two races taking them back to the clubhouse as overnight leaders. On Sunday Rob and Senem posted another win in race for but it was local team Ed Fitzgerald and Becky Diamond who quickly demonstrated their skill wrapping up the last two races. Overall Rob and Senem won by a point from Richard and Ian with consistent Matthew Wright and Alex Pepper taking the third podium place.

Itchenor have introduced the 2000 class to fill a gap in their sailing offering for those who want to race something a little less full-on than some of the twitchy high performance dinghies around nowadays and they also double as a training boat and great facility for members who just want to get out on the water with family and friends but, when the conditions are 15 gusting 20 knots and the sun is out they provide great competitive class racing for all and the intention is to build a fleet that fill a slot on a regular basis as well.