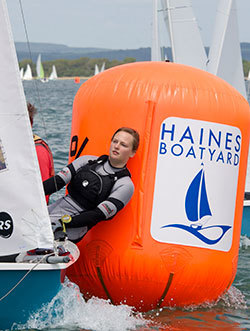 One of the biggest open meetings on the RS200 calendar, Itchenor Sailing Club hosted their annual RS200 Open last weekend which saw just under 40 boats take part. With contrasting conditions over the weekend, the event tested everyone to the best of their ability.

Saturday greeted the sailors with 18-­25 knots and with the forecast for Sunday looking poor five races were held. The first race saw a battle of former champions, Matt Mee and Emma Norris and James Peters and Joanna Wright, with Matt and Emma eventually taking control down the run to the finish. The duo also took first place in Race 3 while George Yeoman and Sophie Ormsby enjoyed success to take their first bullet of the weekend in Race 2. Dicken McLean and Hannah Young bounced back from their previous premature start in Race 3 to take first and second place in the final two races of the day.
By the end of Saturday Matt and Emma led comfortably from Nick Charles and Alice Eyre who were putting together a consistent string of results with only one race outside the top four, while George and Sophie came in third.

Sunday's racing was postponed whilst the sea breeze filled in but once racing started, the day was owned by Matt and Emma who posted consecutive and comfortable bullets to take the event with a race to spare. The battle for second place was a lot closer with only two points between second and fourth position -­ it was all to play for. James and Joanna posted third whilst George and Sophie pipped Nick and Alice for 11th and 12th places. It was then their turn to struggle as George and Sophie managed to salvage a fourth in the penultimate race pulling themselves clear from their contenders.

So for the final race of the weekend, the stage was set and tensions ran high as the fleet were forced to restart under a black flag disqualification. However, once underway James and Joanna, Nick and Alice, and George and Sophie all won the left hand side of the beat and after the top mark James and Joanna had managed to get away and were rewarded with second place overall. George and Sophie chased hard all race but had to settle for second and therefore third overall.