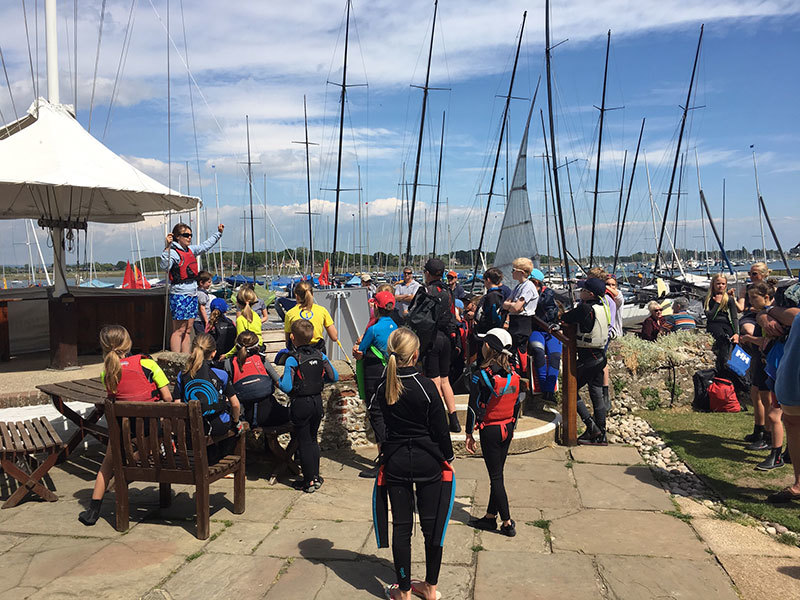 18 Mirrors, 40 sailors and 6 support boats set out on the first Saturday of half term for the Max Mirror raid to Dell Quay. We had 3 up, 2 up, some with parents, some with older kids as helpers and some just taking themselves, everyone was excited to be going on an adventure to a part of the harbour we don't normally go and sail to. The Jones's had very kindly offered their beach and garden as the venue for our raid, a Mirror main and jib marked the spot where we were to land. With the wind in the West we had to approach in a seaman like fashion and drop mainsails to land on the lea shore. This proved more tricky for some than others but a really good lesson that you can come in under jib alone and it makes the landing much easier and more controlled, hopefully some of them might remember this for the next time they have a lea shore landing at Itchenor!

As well as an adventure on the water, this year rather than having a picnic lunch for Max Mirror we had a Bake Off. There was a splendid array of cakes, bravely driven to Dell Quay by some of the mums, so that when we arrived there was an amazing spread of cakes and biscuits. After much deliberation Vicky Jones and I have decided on a winner, whose cake had the most amazing beach decoration, complete with waves, sand, a surfer and sunbather, all made out of icing - well done to Archie Aylwin! The runner up was Phoebe Perry for her Max Mirror decorated delicious chocolate brownies.

Once the kids were full of cake and the adults were full of Pimms and tea the boats were carried back to the beach and launched for the sail home, a few capsizes and running aground in unfamiliar territory and we were back in time for supper.

I would like to say a big thank you to the Jones's on behalf of the Mirror fleet for having us all for the afternoon and for everyone who came and took part.