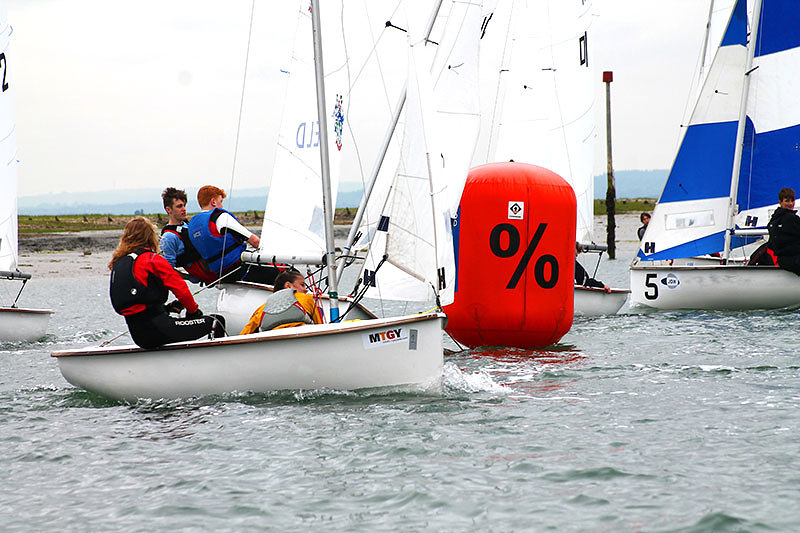 Thursday dawned grey, overcast and damp in Chichester Harbour. Hardly ideal sailing conditions since the wind was light too. However, the 48-strong fleet of Fireflys got away for their first race only a few minutes late caused by the fickle breeze. First to show at the windward mark were Cossie and Izzy Lewis from Sevenoaks School but just behind were Ben Childerley and Ollie Croft from Sherborne College. At the second windward mark, which was the finish, it was Childerley and Croft who took line honours ahead of Harry Barker and Ivan Pylee (Burford School) with Winchester College's Miles Jones and Tiger Tellwright in third place. Jones and Tellwright moved up to second place in the second race behind Dom Lewis and Oscar Wright from Tonbridge School with the Portsmouth Grammar School pairing of Charles Elliott and Joseph Bradley making up the top three.

The third race course took the fleet down-harbour towards East Head. Childerley and Croft led the fleet to the first windward mark a lead they extended through the race. The battle for second place was very close with Jones and Tellwright just ahead of the James Allen's Girls School crew of Julia Mellors and Eveline Suer.

A picnic lunch was enjoyed on the beach at East Head before the fourth race on a course set by race officer Alastair Shaw in the Stocker Lake area south of Thorney Island. With the wind variable in strength and deviating through 45 degrees, Childerley and Croft played cat and mouse with Jones and Tellwright up a conservative track up the centre of the course. However, those who went way left risked the stronger tide that flourished as the pressure built from the South. The windward mark saw the leaders Julian Fung and Elliott Marshall (Rugby School) ahead of Elliott and Bradley with Tonbridge School's Rory Fulton and Harry Tilling not far behind. At the leeward mark the wind was very light and the subsequent beat tested the leaders. Fulton and Tilling made the best of the conditions to take first place with Elliott and Bradley second and Fung and Marshall a well deserved third place, their best of the day.

In races five and six Childerley and Croft re-established their winning ways to end the day on top of the leaderboard. Jones and Tellwright scored seventh and second to ensure they have a healthy gap ahead of the chasing pack.

The ebb tide was strong enough to get the 48 Fireflies to the start area in very still but sunny conditions. A weak breeze set in but it was fitful. Finally a breeze set in from the West and a race got under way. It soon became apparent that the wind was shifting back and forth through 90 degrees. First to the windward mark was the Tonbridge Firefly crewed by Dom Lewis and Oscar Wright. Then it was Harry Barker and Isaac Pylee in the Burford School boat ominously followed by regatta leaders Ben Childerley and Ollie Croft from Sherborne. Childerley and Croft soon established a lead downwind. The wind shifts were such that boats were close reaching on both upwind and downwind legs. None of this faxed the Sherborne pair as they showed their mastery of the tricky conditions to take the gun. Charles Elliott and Joseph Bradley from Portsmouth Grammar School took second place and Barker and Pylee third.

Racing was due to start at 1100 in Chichester Harbour on Monday 26 June. The race team set up a course down harbour near East Head. The wind at the time was fickle so race officer Andy Penman delayed the start to allow the wind to settle. When it did it came in from the South and produced perfect sailing conditions for the 103 RS Fevas entered in the event. After an initial general recall the fleet was really keyed up the first race got started under a black flag. First to show was the Hayling College boat sailed by Henry and Rupert Jameson who quickly established a significant lead, which they held until the finish. In second place were last year's overall winners Louis Johnson and Henry Chandler from Portsmouth Grammar School followed by Sevenoaks's Will Caiger and Tom Baulkwill.

The Jameson brothers took the second race with Johnson and Chandler a closer second. The Norwich School crew of William Pank and Finlay Campbell took the third slot.

Whilst the leading boats had started at the committee boat end of the start line in the first two races, a slight wind shift favoured boats at the pin end for the third race. At the first windward mark it was close order sailing with Fin Dickinson and Tom Gorringe from Ditcham Park School just ahead of Ben Hutton-Penman and Josh Sibthorpe from New Hall School and the Jameson boys. At the second windward rounding the Jameson crew had edged ahead of the other two teams. However as the boats crossed the finish line Dickinson and Gorringe had snatched back the lead from the Jamesons with the New Hall team taking third.

Follow @Itchenor1 for live updates throughout the Schools Week Championships

The hundred strong fleet left Itchenor Sailing Club in a gentle South-Easterly for the second day of this regatta. With the threat of decreasing breezes and rain the race officer Andy Penman got the fleet off on time for their first race. First to the windward mark was the Sevenoaks pairing of Will Caiger and Tom Baulkwill followed by Freddy Wood and Ollie Jameson (Portsmouth Grammar School) and Ben Hutton-Brown and Josh Sibthorpe representing New Hall School. The order would have remained the same had not Robbie McDonald and Emma Wells in a Portsmouth Grammar School boat just pip the New Hall team on the line.

The second race provided the only general recall of the day so a black flag was deployed and the fleet got away cleanly in decreasing pressure. Louis Wright and Thomas Cooke-Priest from Churcher's College pulled off an outrageous port hand start from the pin end and crossed the fleet. They were contention at the windward mark only a metre or two behind the Ditcham Park School's boat of Fin Dickinson and Tom Gorringe. Alex Holborn and Helena Watkins from Parkstone Grammar School made up the first three. At the second windward mark the Ditcham Park boat was still leading ahead of the improving William Pank and Finlay Campbell of Norwich School with the Churcher's boys slipping to third. Pank and Campbell made the best of the increasingly variable wind and establish a significant lead on the downwind leg. At the finish it was Pank and Campbell ahead of McDonald and Campbell from Portsmouth Grammar, who had worked their way through the fleet downwind, and Wright and Cooke-Priest.

So to the final race of the regatta. With wind subsiding and the flood tide at its strongest, the course was moved to the relatively weak tidal area in the Stocker Lake, near the Thorney Island shore. The light breeze caused the fleet to stay together and at the windward mark six boats were closely aligned with Pank and Campell alongside Henry and Rupert Jameson making a return to the front of the fleet after a couple of poor results in the first two races. Barty Gray and James Shaw (Cokethorpe School) and Megan Ferguson and Adam Trubridge from Robert Mays School Odiham were also in contention. The race team shortened the race at the second windward mark and the order was Pank and Campell ahead of Dickinson and Gorringe by half a boat's length with Ferguson and Trubridge third.

The overall winners of the regatta were William Pank and Finlay Campell who finished on the same points as Henry and Rupert from Hayling College. The final podium place went to Fin Dickinson and Tom Gorringe of Ditcham Park School. A fitting result as between them these three crews won seven of the eight races.