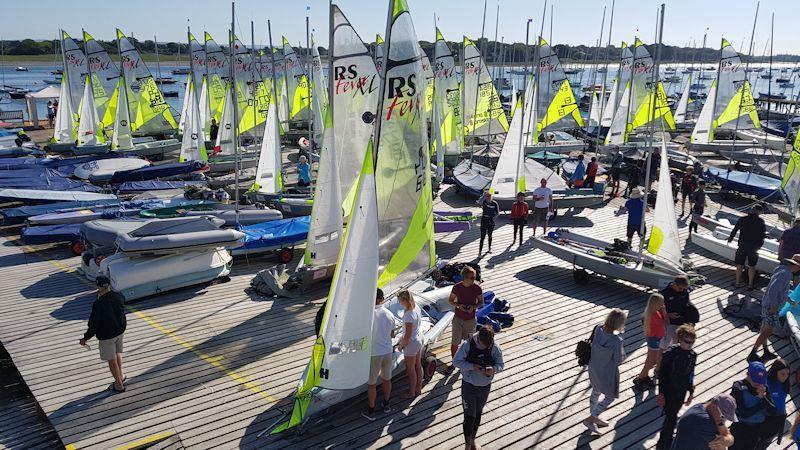 This summer Itchenor Sailing Club held its ever popular Schools Sailing Week for the 67th consecutive year. The conditions in Chichester Harbour were ideal for the almost 300 competitors in Fevas and Fireflies from across the country.

After practice day on Sunday the Feva fleet of over 90 engaged in competition for real on Monday and Tuesday with three races each day. Early to show on Monday were Raulf Berry and Ben Bradley from Portsmouth Grammar with victory in the first race. Ralph Nevile and Tom Stratton Brown (Eggars School) were second as they were on the next race. Third place was taken by Tom and Tristan Ahlheid from Weydon.

Ben and Tommy Millard took line honours in the second race. Monday's final race saw the Eggars crew move up from their previous second places into first followed by the Weydon pair with Libby and Rosie Thompson from Beaconsfield High in their best place of the regatta.

Tuesday started with Nevile and Stratton Brown firmly in the lead. This lead was consolidated by a second in the next race behind the Ahlheids. The Weydon crew also took first place in the final race but it was not enough to overhaul the series lead established by the boys from Eggars.

For the Firefly event that started in earnest on Thursday after practice on Wednesday, the winds were very light and the experienced race officer Alastair Shaw had to wait for a sea breeze before he could get racing started. Barty Gray and Adela Wilson took the first race ahead of two RGS Guildford crews - Oliver Perkins and Nathan Janmohamed, and Matthew Shaw and Sam Rooke.

A crew from Magdalen College School won the second race ahead of the Cokethorpe pair. Thereafter from the third race it was all about Will Pank and Seb Gotto from Norwich School who put in a very impressive string of first places with only a second in the sixth race of the series to spoil the symmetry.

Pank and Gotto continued their domination of the regatta with wins in all of Friday's races. Perkins and Janmohamed were consistently at the head of the fleet to score second place overall as were Patrick Whelen and Harley Stone from Winchester College one point behind in third.