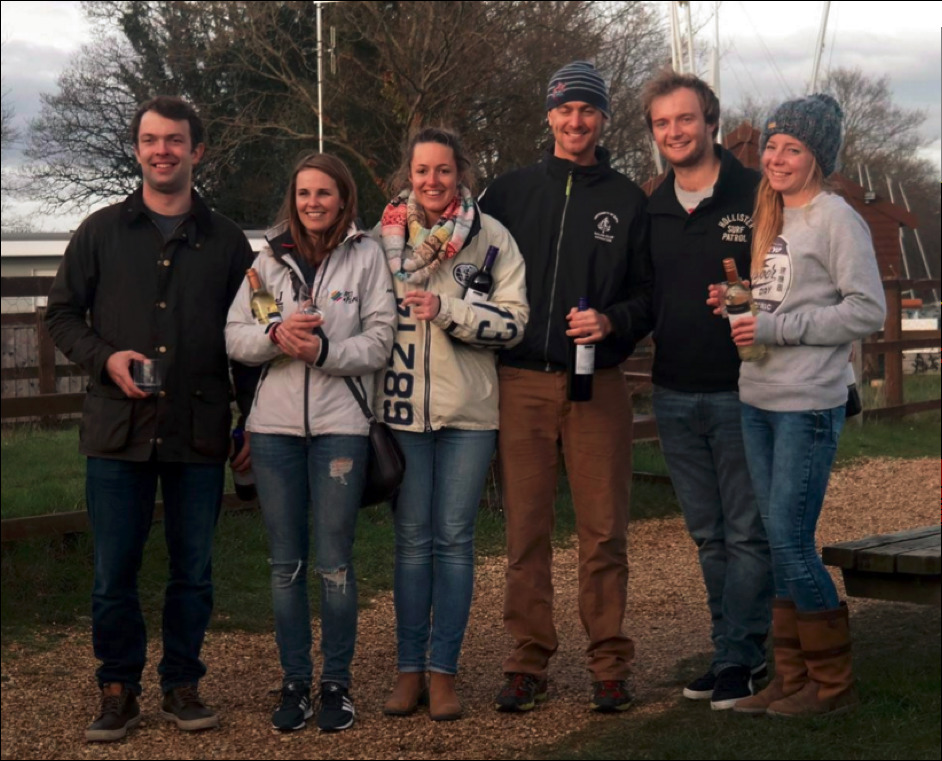 Itchenor members turned up in force at the Wessex Winter Warmer team racing event at Spinnaker on February 13th and 14th.

The Itchenor Sailing Club team was made up of Andy Shaw and Pippa Horne, Rob Struckett and Rosie Sibthorp, and Simon Shaw and Ita Maude Wooller.
"Birdham Bandits" were George Yeoman and Sophie Ormsby, Tim Saxton and Holly Scott, and Sam Littlejohn and Kate Devereux;
Cathy Marsden was sailing for "Bristol Young Old Boys" (BYOB);
Olly Sloper and Ed Fitzgerald were sailing for "Softly Softly Catchy Monkey" (SSCM);
Izzy Fitzgerald was sailing for Exeter University;
Mary Henderson had been called in to sail for Cambridge University.

Saturday saw the grey and windy conditions we have come to expect this winter, however with the shelter around the lake the racing was able to start on time with a round robin consisting of all the teams. At the end of the day each team had raced twelve races and this allowed the Race Committee to split the leagues into a gold and a silver league. Birdham Bandits finished the day on twelve wins, one win ahead of BYOB and Society on 11 with Itchenor in 4th on ten wins. SSCM just missed out on the Gold League but with the top of Silver playing 4th in Gold for a semi-final space it was still all to play for.

Sunday arrived with what Spinnaker is known for - a shifty eight knots and sunshine. The racing was much closer with no easy races due to the fleet split, however SSCM managed to bounce back from their near miss with Gold fleet to take the top spot in Silver, only losing one race, and earning a place in the repechage against 4th in Gold. In the Gold league Birdham Bandits and BYOB were joint top with 7 wins out of 8 with Birdham Bandits taking 1st on count back, booking them both places in the semis. Itchenor and Cambridge had less good days with Itchenor being caught out by the famous Spinnaker shifts on the last beat whilst looking good for an important win against Oxford & Cambridge Sailing Society (Society), which saw a Society boat lay the finish from mark four, and did not make the semis.

The best of five final was run in a nice force three. Birdham Bandits were dominant on the starts taking the final 3-0 and having to hold off strong fight backs from BYOB. The shifty conditions allowed lots of opportunities for both teams to come back into races from what looked like losing positions with Birdham Bandits managing to close out the final beats taking every races 1,2,4 and win the Wessex Winter Warmer.

Southampton University took drone video footage of the final races, Birdham in the White boats and BYOB in the Red boats:
https://www.youtube.com/watch?v=0hY6_mZYiqI

With all of these team members looking to enter the UK Open Championships, the Wilson Trophy, it is encouraging to see the strong pool of team racing talent Itchenor currently has. With "Wessex Exempt" (Ben Ainsworth, Kate Gibbs, Jon Pinner, Tom Heywood and Alexa Pinner) taking a holiday for the weekend there could be another Wilson win for Itchenor members.