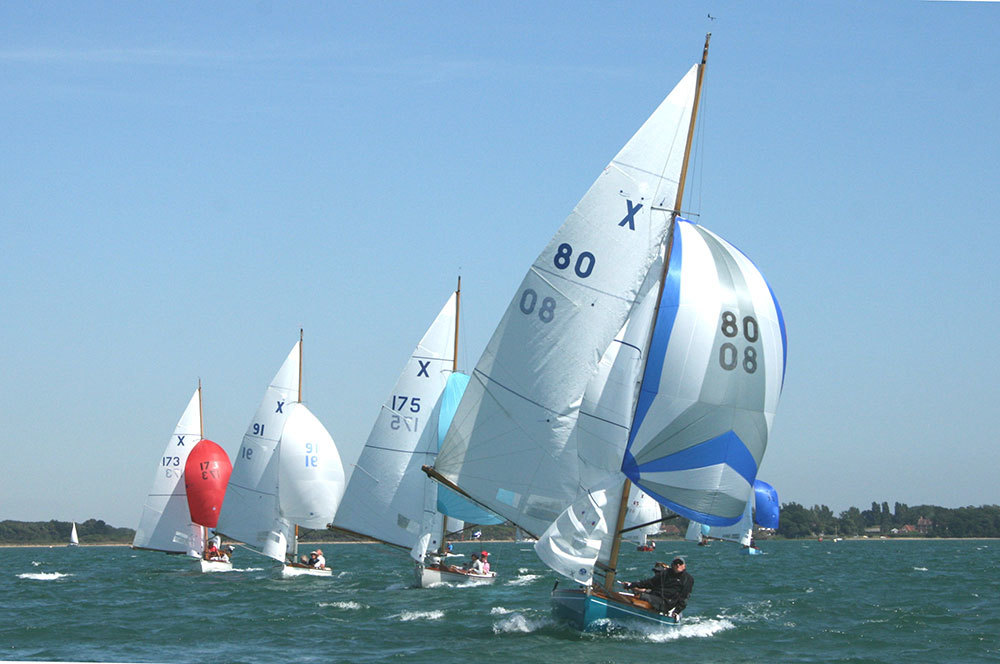 Itchenor Sailing Club's annual Points Week is a tradition that goes back many decades but rarely has there been a more perfect week weather-wise. With beautiful sunshine and changing wind directions, the weather conditions made for interesting and varied racing throughout the week.

For the three classic keelboat classes that race during Points Week XODs, Swallows and Sunbeams, race officer Roger Wickens had decreed that racing should take place each side of high water to give the maximum flexibility in course setting. He took full advantage of this to test the fleets with challenging windward legs both against and with the tide to the fours corners of Chichester Harbour followed by exciting downwind legs with full spinnakers giving a colourful addition to the Harbour background.

Of the 50 boats racing in Points Week, half were in the XOD fleet 22 local boats augmented by three visitors from Cowes. Monday's race provided one of the closest finishes with X55 Falconet (Peter Lawrence, Ron Parker and Jim Dunn) just half a boat's length ahead of X80 Lass (Jeremy Lear and John Tremlett) after two hours racing. Tuesday's race was more clear cut when X26 Catherine (Colin McKinnon with Neil and Ros Hart) established an early lead that could not be bettered by Lass who was again second. On Wednesday for most of the race it appeared that this would be Lass's day but X90 Astralita (Mike Martell, Fraser Graham and Tim Copsey) thought better and overhauled her by the final leg home. Winds on Thursday were the strongest of the week, gusting 25 knots and clearly suited X50 Xcitation (Roger Yeoman with Roddy Bridge) taking first place ahead of Lass in the two spot yet again. In Friday's medium breeze X50 established a lead from the start, took the direct route to the windward mark on the Winner Bank and was not challenged although Lass held on to make it a full set of second places. However, Lass's consistency was more than enough to take first place overall in the series for the Benson Platter. Xcitation was second and Astralita third.

In the Swallow class the early races suggested the series might be a three horse race with Gwaihir (Mike Wigmore, Mark Struckett and Charles Hyatt) taking the first race ahead of Migrant (Charles Fisher, Richard Thompson and Nigel Glennie) and Darter (Tony Glover with Harry and Prue Roome). Darter then took honours in the two short races on Tuesday with Gwaihir scoring a third and a second place. Migrant took a second but then faded with a seventh. Gwaihir established a significant lead in the Wednesday race that wasn't challenged, even by Darter in second position. This was the order again in the first of Thursday's two short races. Gwaihir also took first place in the next race.
So with the series win for the Buccaneer Trophy secured by Gwaihir at the end of Thursday, Friday's race was to decide the minor places. Migrant came back from midweek disappointments with a second place behind Gwaihir but it was only good enough for third overall behind Darter.

The winner of the Sunbeam series was not decided until the Friday, with at least four boats in contention after four races. The Evans/Leach partnership in Polly secured the win on Monday. It was Joe and Cathy Burnie's turn on Tuesday to take top spot in Fleury. Then came Alan Stannah's charge in Spray with three wins in a row to take the Wengen Cowbell for the series win ahead of the consistent Alchemy sailed by Richard and Sarah Pearson. Fleury was third overall.