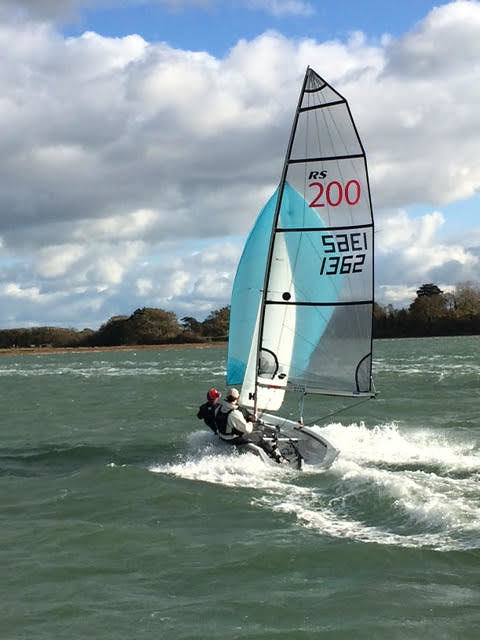 Itchenor Sailing Club's end of season regatta saw sixteen RS200s challenged by a chilly and windy start to November. Both days saw breeze from the North West gusting between 12-20 knots with the wind chill making waiting between races become more important to keep yourself going, the attrition rate showed this as people slowly bowed out through each day. Racing was held towards East Head beach with a beat against the tide for the first few races each day before the tide turned against the wind leading to a bumpy downwind ride in the frisky conditions.

Race one saw the pin end being favoured as you got in to the relief of the beach first but at the top of the beat the right hand side were able to lee-bow the tide and easily make the mark. George Yeoman and Sophie Ormsby managed to get right first and round the windward mark with a comfortable lead, followed by Tim Saxton and Holly Scott, Maria Stanley and Rob Henderson and Jack Holden and Libby Watkins. Over the next few laps George and Sophie managed to hold on to their lead with Maria and Rob challenging them all the way to the finish. Tim and Holly caught some weed and dropped back allowing Ben Ainsworth and Emma Lombard through to fourth, with Jack and Libby rounding out the top three.

Race two saw more boats challenging toward the ship end looking to make the most of the tidal lift on the right; George and Sophie, and Maria and Rob were both over the line and had to return. Meanwhile Jack and Libby led from Ben and Emma, and Tim and Holly. Disaster struck for Jack and Libby as their pole line broke on the first run leading to them retiring from the race. Maria and Rob had caught up with the leading pack by this point and were working their way through with George and Sophie trying to catch up with Tim and Holly. On the last run a breeze coming down from behind allowed these two to gybe inside the group and take the lead up the last beat. But more controversy as Maria and Rob crossed the line to silence having not fully cleared themselves at the start handing the win to George and Sophie. Tim and Holy were second and Greg Hall and Honor Fell stormed down the last run to take third.

Race three had the tide slackening off and it became a race of playing the shifts after the first lap George and Sophie has a small lead over Tim and Holly, and Jack and Libby. Meanwhile Maria and Rob took an unplanned swim in a tack leading to them retiring from the race. Up the second beat Tim and Holly snuck past George and Sophie and were not to be seen again as they held comfortably to the lead with Jack and Libby scoring another third. Ben and Emma can in for their third fourth of the day.

In the final race of the day the tide had turned leading to a big pin end bias and two boats were getting a bit cocky lining up for a port flier (Tim and Holly, and George and Sophie). These two were appropriately blocked out by the fleet who got away cleanly and had to restart leading to a game of catch up, but with the wind now dying and the tide against downwind the choice of whether to heat up or drive low proved difficult. Tim and Holly made the most of these opportunities and whilst Maria and Rob sailed away to take their first win of the weekend Tim and Holly worked up to second and George and Sophie squeaked by into third.

Sunday proved to be similar conditions with the arrival of some additional boats from Hayling Island Sailing Club.

Race five and George and Sophie again started strong and managed to work their way to the favoured right hand side that for a while looked like it was not coming in. Maria and Rob looked to start where they left off and chased hard to finish in second. Reigning National Champion Ben Palmer with Claire Walsh rounded out the top three.

Race six saw Maria and Rob win the pin and come charging in from the left hand side to lead at the top mark from George and Sophie, Tim and Holly, and Ben and Claire. Maria and Rob then proceeded to sail into the distance winning the race by nearly a minute. Behind things were much closer with a group of four boats were battling it our for the remaining positions with Jack and Libby gybing early down the second run and coming out strong. Tim and Holly managed to hold of the group up the last beat and went out to the right hand side of the run with George and Sophie gybing early only for Ben and Claire to roll them. Tim and Holly hit a lull at the very bottom of the run allowing the other two to sneak through on the inside relegating them to fourth whilst Ben and Claire took a hard earned second.

Race seven and the tide had turned and the wind picked up slightly making the race course bumpy with short sharp chop. Off the start the wind clocked left and as the fleet flopped over on to port it was George and Sophie who had popped out in front with Rob Gullan and Izzy Allerston. These two had a comfortable gap to the rest of the fleet and with the turning tide were able to extend away down the run. As the wind really started to pick up on the last lap fatigue and errors started to crop up, Tim and Holly managed the situation best to take third ahead of Ben and Claire while a number of boats took a quick dip.

Overall it was a fantastic way to round out the season for the 200s at Itchenor. Thanks to race officer Roddy Bridge and his team for managing to get so many races away so quickly and keeping us all moving in the challenging conditions.