On the weekend of 16/17 February, Itchenor SC hosted Merlin Rockets as well as RS200s for the first time in the annual Winter Warmer series. The race committee, led by Roger Yeoman, managed to get 8 races for each fleet over the two days which saw 15 Merlins and 11 RS200s descend on Itchenor to be met with a very balmy winter weekend.

Saturday started a bit grey but warm and the sailors launched for the midday start on an ebbing tide. The Merlins were sent on a Triangle-Sausage, and the 200s then followed on an "inner loop" Windward-Leeward course. 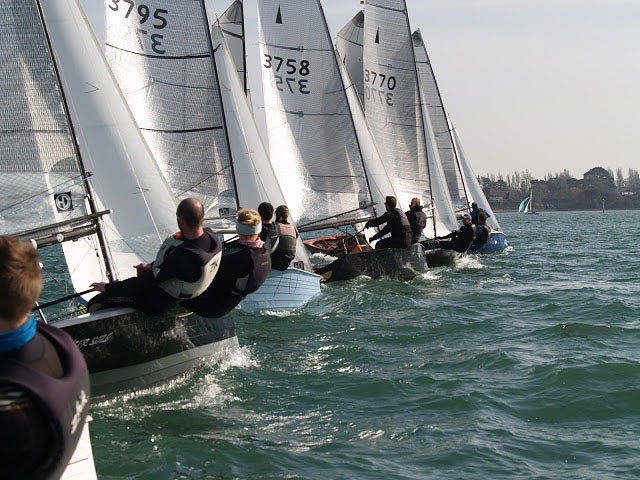 On the Merlin course the racing was tight with four different race winners in the four races. Christian Birrell and Sam Breary started how they finished last season taking a solid win in race 1 after reading the tide right on the right, and right continued to pay with Alex Jackson with Caroline Croft (making a rare appearance at the pointy end) taking the bullet. Tim Fells and Fran Gifford made the most of the dying breeze in race 3, taking the initiative down the long run against the tide, they manged to sneak around the outside of the pack to take a lead that they did not give up. The final race was taken by Andy "Taxi" Davies and Pippa Kilsby who nailed the first beat, rounded first and were never seen again!

On the RS200 course the day was dominated on paper and the water by Arthur Henderson and Mia Harnett, taking three race wins out of four, with Greg Hall & Honor Fell taking race 3. However over night only 3 points separated 2nd to 4th.

The teams then sat down to an nice home cooked curry at the club with a couple of games set up after which left a few sore heads the next morning, admittedly more from the home teams!

Sunday delivered what could only be called "glamour", 10-15 knots, wall to wall sunshine and an empty harbour. Another 4 races were held, with the Merlin fleet being particularly badly behaved at the start due to the strong tide. The course was a bit more even and this led to very tight bunches round the marks and gains to be made if you could escape. The honours were shared between Taxi & Pip and Christian & Sam, although Jack Holden & Mark Oakey kept the honest applying the pressure all the way round.

In the RS200s, so the strong tide also made starting and some very tactical download legs, with many saliors either getting it very wrong or not getting close enough to the shore. However this didn't deter Arthur & Mia from continuing their winning ways. Although it was past Class Captain Rob Struckett with Senem Cilingiroglu who applied the pressure winning race 2 of the day with a sneaky bit of local knowledge and splitting away from the pack down the first run down wind, creating a considerable lead between them and second place as they round the leeward mark.

Overall results were tight with Taxi & Pip beating Christian & Sam by 1 point, whilst on the 200 course Arthur & Mia took a convincing win with 6 bullets out of 8.

A huge thank you goes out to Roger Yeoman, Mandy Henderson, Harry Roome, Roddy Bridge and Graham Colbourne for running some fantastic racing. Also thanks goes to Nick and the house team for the dinner and members room on Saturday night.

The final Itchenor Winter Warmer will be held on the 9th and 10th of March. Where we hope to welcome the return of Merlin's and RS200 fleet to Chichester harbour to enjoy some more spectacular spring sailing.