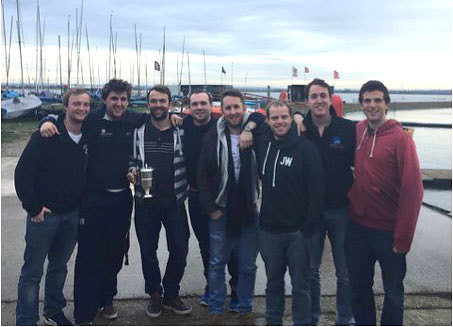 The format was aiming for 2 round robins for the 7 teams which included multiple defending champions "Thames Exempt" who Itchenor sailor Ben Ainsworth was sailing with, World Match Racing Champions Ian William and Simon Shaw sailing together for "Serpentine", Royal Thames, Royal Northern & Clyde, Royal Yacht Squadron and the Rome Match Racing team. However a lack of wind led to a delayed start on Saturday which allowed for only one round to be completed.

We started slowly but took advantage of racing the weaker teams from Royal Northern & Clyde and Royal Yacht Squadron which led to fairly uneventful races where it was obvious we needed a bit of practice with our manoeuvers. Against Royal Thames we were able to inflict payback for the NYYC Invitational in a very close match where we managed to claw back the Thames after the first beat to take control down the run and convert at the final top mark into a winning 1-2 combo. Against Rome our superior boat handling won us the race slowing the two Rome boats into an overlap which we could convert into a winning combo on the first lap.

Next up we had the 2 big matches, the first a grudge match, Serpentine vs Itchenor, Shaw vs Shaw. However, even with all this hype it turned out to be a non-event where we started poorly and Serpentine sailed off in a 1-2. Finally, the best race of the day against Thames Exempt, where after a controversial start we took control down the run and nearly converted at the top mark into a 1-2 only for Thames to come from behind to bring the match back in to the balance. Down the final run the pairs split and at the bottom we had a slim advantage and just as it looked as though we had the victory it was another Itchenor member, Ben Ainsworth, who spoiled the party dishing out a penalty and taking 3rd in the final seconds of the race.

Due to the poor forecast the RC took the decision to take the semi-finalists from the Round Robin and racing these on Sunday after a silver fleet round robin in the morning. This put us up against the Thames Exempt team again in a first to 2 wins semi final. Thames took the first race which had many lead changes but finished with a strong bottom mark which allowed them into a 1-2. The second race we took with another close race which was finished with a big last ditch dial down with our boat doing just enough to keep clear and then round up and cross the line. The final decider was no different with constant lead changes and eventually with the wind going light we held slightly more speed around the leeward mark and managed to sail through the Thames boat and tack across their bow to give Itchenor a place in the final.

The final was against Serpentine and 5 times match racing world champion, Ian Williams.I as well as the Shaw brothers matching up again., The first race began similarly to the round robin with Serpentine taking a commanding lead off the start. However, with the fading winds the gusts downwind allowed us to attack from behind and with the petit final in front of us going slowly the Serpentine team sailed into the back of a melee of boats and this allowed us to capitalise with Tim and team forcing Ian wide and allowing myself, Andy S, Ed and Andy P to sneak inside and eventually plant a penalty on the Serpentine boat while their team mate were unable to capitalise on the mess and help. Race 1 to Itchenor. The next race again our starting left something to be desired, but we were bailed out by a nice shift and great speed down the run. This allowed us to convert a 3-4 to a 2-3 by the final mark and the pair split with Tim et al controlling their pair whilst Ian & Simon took it upon themselves to mark us (I believe this is because Shaw Jnr had been 'talking smack' pre race). Eventually we managed to wriggle free and whilst crawling in a hard cover to the finish line Tim and the boys had done a better job on their side and we crept across the front of their pair to win 2-0 and take the Carmela Cup.