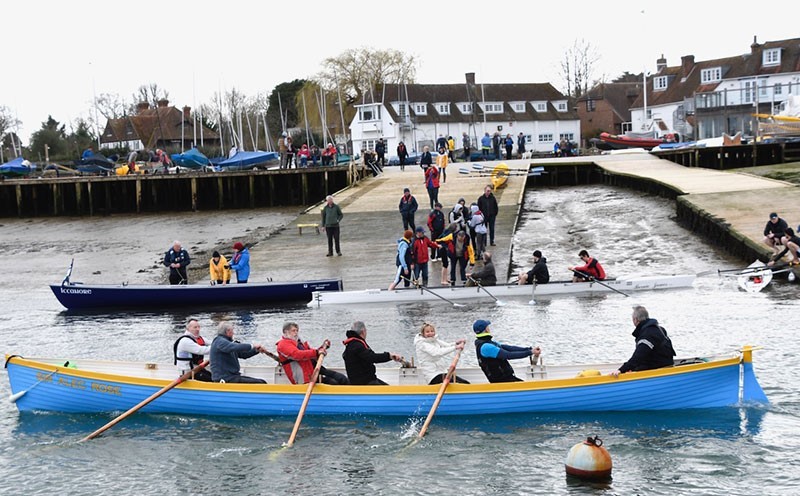 The sun shone and the boats and people kept arriving for the first Itchenor Rowing Rally on Saturday 2nd March. They rowed from Eastney, Langstone, Emsworth, Bosham and Westlands and drove from the Hamble and Portsmouth to assemble a flotilla of different styles of rowing boat.

The aim of the day was to get as many people rowing in as many different types of boats as possible.

By midday Itchenor Sailing Club had a wide array of boats including a St Ayles Skiff, a Cornish Pilot Gig, Solent Galleys, a Celtic Longboat, Burseldon Gigs, a Claydon, an Epona, a moving seat quad scull, a moving seat coxed 4, a single scull and a Langstone 4.

Over eighty people turned up from the local area to try out all the boats in the Itchenor Reach creating quite a spectacle.

Particularly popular were the Celtic Longboat, Solent Galleys, Bursledon Gigs and the quad sculling boat, which had queues all afternoon.

The day was followed by an evening talk in the Club House by Steve Woods of Langstone Cutters on how to win the annual Great River Race on the Thames.

The Rally was scheduled to continue through Sunday but sadly activities were cancelled due to Storm Freya.